Over the past month and a half, I’ve stumbled across the formation of a new league in Asia, the Nepal Super League. The franchise league was announced in March 2021, and its inaugural season commences April 24th of this year. Seven teams take part in the inaugural season, and the season lasts for about a month.

I’ll be honest, when it comes to Nepal and football, I only know one name and that’s Rohit Chand. The Nepali football icon has made a name for himself here in Southeast Asia, having played for T-Team in Malaysia and PSPS Riau. Currently, he’s turning out for Indonesian Titans Persija in his second spell with the club. Besides Chand, I have minimal knowledge about football in Nepal, let alone this new initiative.

Thankfully I had Subhashish Lala Koirala, Executive Officer of Biratnagar City FC, a founding member of the inaugural league, to explain the league to me and what it entails for Nepalese football.

I think it’s worth mentioning that Subhashish is one of the most passionate footballing fans I have ever come across, and his drive to help grow the sport in Nepal is immense. Besides working as a computer engineer, he also runs a web interview series called the VAR (View and Review) show. Interestingly, Aleksandar Đurić has appeared as a guest speaker along with a host of other international guests.

The Nepal Super League – Why Was it Formed?

So what exactly is the Nepal Super League? Well, for many outside Nepal, or rather South Asia, the idea of a franchise league is an alien idea. Or is it? I largely assumed that the Nepal Super League was created after being inspired by the development of the Indian Super League. Subhashish explains that’s not entirely the case. 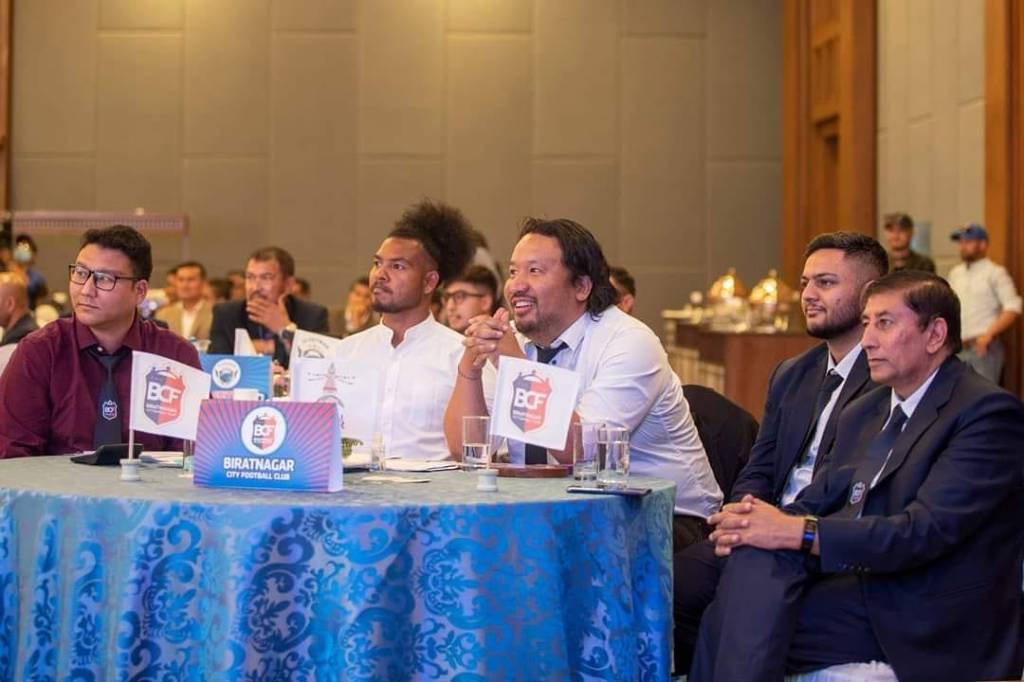 There is no one factor or source of inspiration for the Nepal Super League, and its organisation is a culmination of various influences. One thing is for sure, though. The Nepal players are the biggest benefactors because of the higher standards of professionalism and media coverage that they will receive from the league.

So why did Subhashish join Biratnagar City?

“I am from Biratnagar. It’s one of those places that provide a lot but does not get any representation. Players here are good but where do they go?”

Biratnagar did not have any club, and thus, players had no option to further their careers as professional footballers. With the exception of Rohit Chand, not many Nepali footballers have left the South Asian continent, if not Nepal itself. Thus, there was no real prospect of pursuing football on a higher level than what the Martyr’s Memorial A-Division League can offer.

Therefore, the Nepal Super League changes this dynamic with its introduction by establishing a sense of professionalism that players could be inspired by. The Super League in many ways helps prepare potential Nepali superstars for higher levels of competition overseas and sets a new benchmark for all domestic footballers.

“I wanted to have a club that produces a pathway for kids to one day reach the national team. If they do well in the youth leagues or the academies, they could one day play in the Nepal Super League with [Biratnagar City FC].”

However, the league itself will only take place for approximately one month and as an outsider, it seemed very short to me. Naturally, I was curious about the duration of the league.

Subhashish shares that while the Nepal Super League could have launched as a six-month league, starting off with a one-month league offers fans the ability to rally behind the competition with more support. In a world where top-flight European football dominates the local landscape, sustaining support for the Super League clubs is vital and an initial one-month league helps to pique the public’s interest.

More importantly, starting the league was the biggest challenge that the clubs seem to have finally overcome with the league kicking off on 24th April.

“This league is the first of its kind in the country and hopefully, it gives birth to more teams joining. It also depends on how the team performs. Hopefully, it grows and of course, no one knows the future but hopefully, it grows into a full-fledged league that lasts a span of six to seven months.”

Like every other team in the Super League, Subhashish believes that winning the Nepal Super League should be a priority for the club but besides this immediate goal, he also has one eye on the future. 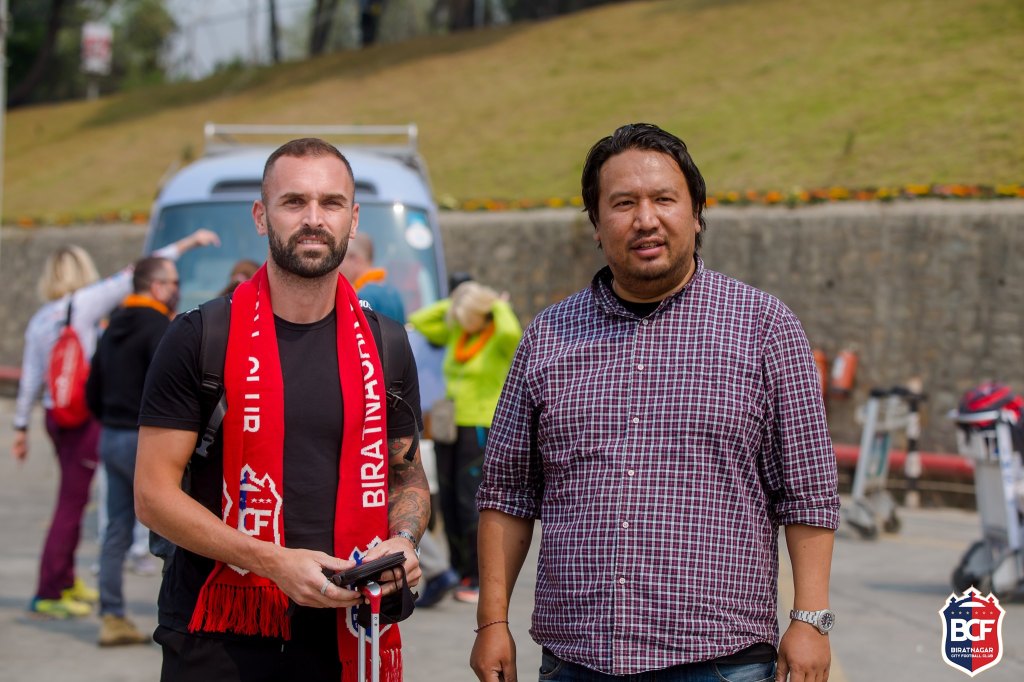 The club has also issued a statement to the rest of the pack with the signing of clinical forward Pedro Manzi, who is probably the most high profile signing in the league. The Spaniard turned out for Chennai City FC for the 2018/19 season, which Chennai won under Singaporean head coach Akbar Nawas, and was also Golden Boot winner that season. He would spend the following season with Albirex Niigata in the J2 league before returning to India with Mohammedan SC.

Ensuring club sustainability with a solid fan base and establishing a strong administrative foundation became other goals for the club. What really caught my attention was Subhashish’s plan to help their players establish their own branding. Often, in many parts of Asia, there is still a vast gap in footballers and their individual marketing. At Biratnagar City, there are plans to help educate players on this and also assist them in this increasingly essential aspect in the footballing world. Support from the fans is however, crucial for this to happen.

“It is important for fans and people to go and like a player’s photo. For you, it may just be one ‘like’ but for the player, it really inspires them. They may get a brand deal when a lot of individuals like their photos or follow them. Through that, they may get bigger, get more brand deals and the sport [by extension], the sport becomes bigger.

“In South Asia and to some extent Asia, you have very few players who are brands. Who was the highest goal scorer of the AFC Cup in 2019? [Well, I (Vikram) didn’t know]. It was Bienvenido Marañón from Ceres. You see, someone who is in fact, the all-time goal scorer for the AFC Cup, the Europa League of Asia, isn’t even known by the masses at that stage. Even at that continental stage, players are not a brand. Our intention is to build players profile and their brand.”

The Nepal Super League is an exciting initiative and its inception can only spell more interest in Nepalese football, both locally and abroad. For Subhashish, he is looking forward to finishing the league strongly. He does note that the short campaign period probably means it is difficult to assess the coaches or players. For all you know, the coach who wins the league may just be as good as the one that finishes last. The subsequent seasons would paint a better picture for sure. Clubs should indeed give coaches and players time to adapt, gel well, and prove themselves.

I spoke a mix of English and Tamil during this interview and I was happy that I still could string sentences together in a somewhat fluent manner. In Cricket Crazy India, there has been a recent surge in support for football. Don’t get me wrong, there have always been a dedicated minority in India that […]

Once again, I hope my Tamil Language teachers are proud of me. I did this interview entirely in Tamil. After interviewing Sriram, my curiosity in Tamil Nadu and I-league football piqued. In my quest to expand my coverage of Asian football, I decided to interview another Indian footballer. This is the story of Jockson Dhas, […]

Jesse Lingard and the Story of Second Chances

How Jesse Lingard’s rise from the ashes is the feel-good story of the season in the Premier League… We all undoubtedly know who Jesse Lingard is at this point. The English attacking midfielder has seemingly been in the world’s eye for years now, and not necessarily for the right reasons. The kid from Warrington, a […]

Why the Singapore Premier League should adopt a Franchise mode

While the national team has been relatively weak in recent years, Singaporeans are very much still football-crazy. From diligently watching Premier League matches to playing Futsal with their friends, football is not just a way of life for many Singaporeans, but it is almost a religion. Growing up, I would often bond with my friends […]

This site uses Akismet to reduce spam. Learn how your comment data is processed.